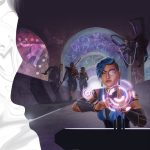 I’m going to have a Crow’s Nest video soon that will cover some of this same material, but I wanted to write down my thoughts and let you all know where I’m at, where the company’s at, and where Coyote & Crow Games will be heading in 2023.

Starting on a personal note, I’ve recently moved and while it’s a positive move into a lovely nearby home with more workspace and game development space for me, it’s also taken the expected toll on my body, my psyche and my wallet. So I’m a little wiped and looking forward to a relatively quiet winter. I need some chill.

As I write this, I’m also concerned about ICWA and SCOTUS’ hearing of the Brackeen v Haaland case. And the general outcomes of state and federal elections, like many of us are. It’s been an exhausting year.

Stories of the Free Lands

Stories of the Free Lands was a big success. We took some huge risks in offering PDFs up for a crowdfunding effort and in moving away from Kickstarter to work with BackerKit for their beta platform. And now we’re wrapping up work on ten stories for the Coyote & Crow RPG that I really can’t wait to share with you all. There’s some really fun worldbuilding in them and some amazing art. I’m so grateful for the support and love our backers and fans showed us for this project. If all goes well, we’ll be delivering those PDFs very soon.

In addition, backers who pledged for the Story Guide Screen and Naasii should be receiving their products soon. We’ve already begun the fulfillment process and games are on their way. Fulfillment this time has been so much smoother.

Speaking of Naasii, we have three products landing on November 16th:

I’m thrilled for all three of these and I think they’re really going to help people get their heads around the Coyote & Crow universe. Everyone involved has put blood, sweat, and tears into these things and I can’t wait for you to dive in.

Let’s talk about social media for a minute. We technically still have a Facebook page, but we’re letting that go idle and really only using it to attach to any FB ads we run. We’ve got an Instagram, but I’m personally running it and frankly it’s not a priority. I’ll occasionally drop announcements or art there, but it’s not a regular source of communication for us.

Twitter is…a mess. For the moment we’re staying on board and I’m watching things. To be honest, it’s been our best platform for engagement with non-hardcore fans and for bringing new folks into the fold. I’m not sure there’s anything out there that can replace it. So far, I’m not sold on Tribel, Counter Social, Mastodon or anything else. It’s likely that if Coyote & Crow leaves Twitter, I won’t add a new presence elsewhere to replace it.

That said, I am looking to find someone who can take on creating a TikTok channel for us. While I’m not a user or a fan myself, I’ve seen what boardgame and RPG TikTok has to offer and I think it’s a great way to reach new audiences. The problem has been finding someone to do it. My requirements were experience with TikTok and Native American heritage. So far, I’ve had two people get in touch. Neither of them have gotten me their TikTok info and one of them didn’t even include their name, so…yeah. That may take awhile.

Lastly, we have our Discord, which is growing and fun and engaged. Great folks there and if you’re looking to hang out with C&C fans, it’s the place to be.

I’m currently in various stages of negotiations with a number of different partners. From new merch producers, to minis, to foreign language localizations for the RPG, non-profits and actual play groups, film and television work. All kinds of stuff. When it comes to those kinds of things, it’s difficult to get specific because so much can happen between ‘talking’ and ‘contract signing’.

I’m hoping to have some announcements to make before the end of the year and all of these possibilities are really exciting. We shall see.

In the meantime, you can find Coyote & Crow on Roll20, Foundry VTT, and DriveThruRPG.

As I stated earlier this year, Coyote & Crow Games won’t have a booth presence at conventions where Roe V Wade has been overturned or people cannot get access to abortion care. I may make personal appearances at some conventions and I may make for some other allowances for other things here and there. But in general, I don’t want tax dollars going to states who are going to deny women basic medical care.

With that said, I’ll be attending PAX Unplugged this year. I’ll be taking some meetings, doing some play testing, sitting on at least one panel and hopefully playing some games. If you see me, please do say hello.

I’ll also likely be attending the GAMA Trade Expo next year and I’m considering Essen Spiel. I’d also really like to attend Big Bad Con as a company and have a full booth and events. Fingers crossed.

I have three releases planned for 2023 currently. One is a stand alone, family friendly, hobby strategy game that centers around semi-cooperative community survival and gifting economies. The second is a constructable, non-collectible competitive card game. Both are set in the Coyote & Crow universe. The third is a Saga setting book for Coyote & Crow the RPG that will be written by myself exclusively and illustrated by a single artist. All three of these will likely go through crowdfunding.

Between those three things, the day to day of running Coyote & Crow, and attending conventions and other business travel, it should be a pretty busy year for me.

How You Can Help

If you’re interested in partnering with or working with Coyote & Crow, please do get in touch through our contact form on this site. While we aren’t currently hiring, I always like connecting with writers, artists, editors, etc, especially Native folks. In terms of partnerships, I’d really love to see some more folks step up with ideas for how they’d like to use the C&C license. I’m absolutely willing to license out this world to inventive folks. If you’ve got a C&C Saga book you’d like to write or draw, a board game you’d like to make, a craft or merch idea, I don’t want to stop you. Talk to me!