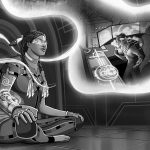 I’m really pleased to report that our core writing is done! We’re also mostly wrapped on our sensitivity edit and our copy edit is well underway. As chapters are finished and we collect art assets, those chapters are being passed along to our layout designer. We’re also in the process of incorporating the last bits of feedback from our play testing processes. Things are coming into sharper focus every day.

Our one hang up is, of course, art. However, we have made good strides. As I write this we have only eighteen pieces of art left that are unassigned to an artist. We also have 75(!) pieces of completed art from more than 20 artists. I’m so proud of the work they’re doing.

Overall, things are coming along smashingly and I’m so excited for you all to see the thing of beauty we’re assembling. There is however, one big blot on all of this and it’s definitely something I want to explain to everyone. It concerns the price of the game. Before anyone gets their hackles up, no, we aren’t going to be asking backers for more money. Your games are fine and locked in.

However, we’ve officially made the decision to change the retail price of the game from $50 to $60. It was tough to do, but there was some really sound logic behind it and I want folks to understand all of the reasons and how it may affect things going forward.

When I was a naive young man back in March of 2021, I priced Coyote & Crow’s core rule book at $50 and set up our shipping costs for the Kickstarter based on a few assumptions. First, it was an ‘average’ price of a hardback RPG core book. I assumed our book would come in at about 350 pages and had gotten manufacturing quotes based around that. I also expected to do no more than about about $25,000 total on our Kickstarter if it went well. Meaning I expected to be shipping around 500 books. We subsidized our shipping costs into part of the price in order to make shipping an easier calculation for everyone, even though it was going to potentially eat into our margins if shipping costs increased at all. What’s the worst that could happen, I thought?

So here we are in July and we’re facing a huge materials shortage, world wide, including paper. We’re dealing with huge increases in shipping and freight costs. Instead of 500 books, I’m delivering 17000. Instead of 350 pages, we’re coming in at over 400.

Things have changed. And likely the game industry as a whole, will never go back to the way it was. I may talk more about the overall situation on our development blog, but the point is, changing Coyote & Crow from $50 to $60 at retail isn’t an outlier situation. Instead, it’s likely indicative of an industry wide shift to an increase in prices for games. Again, if you backed Coyote & Crow, or did a late pledge, your games are locked in and you’re good. We’re not asking you for more money.

But starting on August 15th, we’ll be raising the prices of the book on the late pledge page of our BackerKit to $60 and investigating an increase to our shipping rates. So if you haven’t backed and are thinking about it, you may want to do that soon if money is an issue for you. It’s also likely that we’ll be looking at an increase in prices in all future Coyote & Crow products too, especially if they contain plastic or have to come from overseas.

Okay, with that out of the way, let’s talk about other upcoming products!

Coyote & Crow is overjoyed to announce that we’ve entered into a partnership with Pe Metawe Consulting! Pe Metawe is an Edmonton based, Indigenous owned and operated firm that offers a large array of consulting services and workshops. They also own a retail game shop!

As Coyote & Crow began to grow, we realized that we didn’t really have either the expertise or the bandwidth needed to handle some of our social media challenges. The folks at Pe Metawe have enthusiastically stepped up to help us plan and organize some incredible tools and services for all of you. I’m so excited to see everything they’ll be doing to help grow the Coyote & Crow community.

So what is it that Pe Metawe will be doing for us? This is just a brief outline of the things they’ll be bringing to you all in the coming months:

You can find out more about Pe Metawe Consulting and Pe Metawe Games at:

This mechanic might be my favorite thing we developed for the game. While Stats and Skills and Abilities are all well and good and add a ton of mechanical value, Gifts and Burdens are what really make a Character feel realized. At least, that’s my strongly held belief. They make Characters feel more like real people and give them ways to shine and struggle that make them relatable.

The concept for Gifts and Burdens was certainly inspired by Merits & Flaws from Vampire the Masquerade. One of the things that I never really liked about that system though was that values were objectively attached to each of the merits and flaws. The overall idea is still fantastic but its implementation hasn’t aged well. Revamping it required some key changes. Foremost among those is the concept that whether any particular thing is a Gift or a Burden is decided by how your Character views it.

But before we jump into further explanations and examples, let’s define what a Gift or Burden is. These are things that a Player chooses for their Character or can be assigned by Story Guides that add flavor or distinction to your Character and also have a mechanical effect on game play. That last part is key and I’ll explain why in just a second. Gifts and Burdens are also Ranked, from Level 1 to Level 3. Level 1 is minor or trivial while Level 3 is pervasive or critical. Often, each Level equates to a modification to a Character’s Success Number on a Skill Check.

So how does it all work? Let’s use an example that we use in the core book as well. Let’s say you are building your Character and you decide that you want them to have a sister. Great! You can just include that in your Background section. Done. But wait, you decide that the relationship with the sister is important enough to your Character that you want it to have a mechanical effect in the game. That’s where your Character’s point of view comes into play. Do they see their sister as a positive or negative effect on their life? Or both? Maybe they’re a little sister who is always getting into trouble, causing you to divert time and energy to get her out of situations. Maybe she’s a scientist who is always there to help you solve technical challenges that your Character isn’t skilled at. Maybe she’s someone who is always causing you problems, but is also there whenever you really need her. You’ll decide whether your sister is a Gift, Burden, or both as well as what Level.

You might be asking why you’d ever give your Character a Burden. Besides the fun of it and the depth it brings to your Characters, it also supplies you with a few extra points to play with during your Character creation process, allowing you more points for Skills and Stats. In addition, there are other ways that your Character may receive Burdens during game play from the Story Guide (we’ll get into that another time).

So let’s say you’ve chosen to give your Character a little sister. You’ve written her down as a Level 2 Burden, which is pretty involved. Maybe she needs to be with you often and you struggle to find ways to leave her at home instead of bringing her along on your adventures. You’ll work with your Story Guide to set up the exact situation. From there, the Story Guide will decide when this Burden comes into play. A standard effect might be a modification to your needed Success Numbers on Checks. And any time you need to make Dice Checks and your little sister is involved, you’ll receive a +2 penalty to your Success Number. Meaning that if you’d normally need to roll a 6 or higher for a Success, you’d now need an 8. There could be other ways to define the mechanical effect as well and you the Story Guide are encouraged to do so.

Keep in mind that your sister being a Burden, doesn’t automatically mean she’s annoying or cruel or careless, etc. It may mean that your Character cares deeply about her well-being and is often distracted by her presence or puts her above your Character’s own needs.

You’re also welcome to take a Gift or Burden more than once. Or the same thing is both a Gift and Burden. Maybe that same sister is a resource or source of strength for your Character. Or maybe you have two sisters that are important enough to your Character to have a mechanical effect on the game. The combinations are vast and the point is that you and your Story Guide should collaborate to ensure that you’re taking Gifts and Burdens that not only help round out your Character, but are able to be integrated into your Saga and don’t overburden your Story Guide.

There are a number of basic categories we list out in the core book to help you get started on creating your Gifts and Burdens, but you aren’t restricted to them. Some can only be taken as Burdens. Some have special rules or qualifications. You’re also encouraged to work with your Story Guide to create new categories if you have ideas. Here are the categories we offer in the core book:

As you can see, there’s a lot to choose from and within each category, a multitude of possibilities. The goal is to give you a wide variety of ways to shape and refine your Character to anything you can imagine. And as your game evolves and your Character progresses, you’ll gain Gifts and Burdens, lose them, and change them.

In our next update, we’ll discuss the Legendary System, which is our answer to experience and Character progression. Part of this includes the evolution of Gifts and Burdens.

That’s all for now. I hope you have a great week. Please be careful and kind. Get vaccinated, mask up. Oh, and if you haven’t filled out your backer survey yet(I’m looking at all 908 of you), get it done, please!